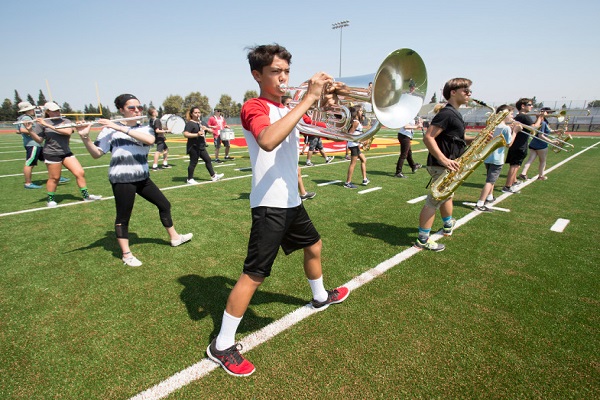 For the first time ever, Willow Glen High School will have its very own marching band this fall.

The 24-member band also will be the first in recent years to join the San Jose Unified School District, according to Randy Schmidt, Willow Glen High’s principal.

Adding to the spectacle on the field at football games and other campus events will be a six-member campus color guard.

Although there was plenty of school spirit when he attended Willow Glen High 20 years ago, that key slice of Americana known as a marching band was missing then, Schmidt said.

“In the ’90s, it was just so common that you didn’t have that,” Schmidt said in an interview last week. “The common thing would be to expect a cheer team and that was it. I think the popularity became bigger when certain movies came out.”

Band director Kelly Walker began organizing the band last year, when she also introduced AP music theory classes, but had the idea since she first started teaching there.

“When I started, one of the very first questions I asked was, ‘is there a marching band?’ ” Walker said. “I was told there’s not, but there’s a desire for one.”

Recalling her days as a former competitive member of “a strong marching band program” at Valley Christian School, Walker said it’s a “worthwhile activity for any high school to have.”

“It just provides so much well-roundedness,” she added. “Not only is it a musical experience, it’s also an extremely physical activity. They’re getting quite a workout and they’re building their musical skills. It’s almost a team sport.”

Students have been practicing twice a week since summer with Walker and her husband, who she met in marching band at Valley Christian and now also teaches at Willow Glen High.

“The visual aspect of things is actually currently being run by my husband,” she said, such as getting students through warm-up exercises, formations and drills. “He has a lot of good insight into brass playing in particular, so that’s really helpful.”

The band is open to all students, even those who don’t play the tuba, trumpet or French horn.

Sophomores Julia Sarinana and Kat Winch learned the xylophone to join the band because they couldn’t otherwise with their usual instrument, the piano. Both girls took to it quickly due to similarities between the two instruments, like “using mallets instead of fingers,” according to Winch. But there was a bit of a learning curve.

“We had to learn to sight-read,” Sarinana said. “That was difficult.”

Though the band hasn’t even performed yet, Walker is already dreaming about taking it to competitions.

“That’s sort of the big motivating factor for most high school marching bands, I think, is the competitive aspect where you go out and you do your field show,” Walker said. “It’s big in the South Bay. It just happens that San Jose Unified doesn’t have any competitive marching bands in any of our high schools.”

Becoming the first Willow Glen marching band champions is a prospect that excites Winch, although she’s just happy to help introduce the “genuine marching band experience” to the school.

The Willow Glen High School marching band will perform during half-time at the school’s homecoming game on Sept. 22.

Courtesy of The Mercury News